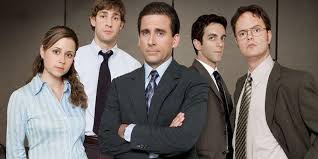 In my search to quench that trivia thirst, me and some of my besties decided to jump on this potentially awesome event. I mean, it’s The Office. Trivia. and a Pub Crawl. Pretty much a no-brainer for me and my trivia tribe. I had never done a pub crawl before, so I really had no idea what to expect.

In preparation for this monumental event, we all marathoned the classic go-to show for most normal people with a sense of humor. What I love about the show is how I can relate to the characters and the story lines. From the pranks, office romances, cringe-worthy moments, and tear-jerking touchiness, it is definitely on my top-favorite list.

In addition to the marathoning, we all planned our costumes and who we were going to go dressed as. We had Mose, Dwight, Ryan, Karen, Nate, Asian Jim, and Jan after her boob job (me). As much planning and prepping we did for that day, none of us were ready for the downpour that soaked our efforts.

We all met at “Nate’s” apartment to pre-game. We watched a couple of episodes, then treked in the pouring rain to Michael Murphy’s Dueling Piano Bar , the check-in location. “Nate,” our team captain, checked in and got our nifty team pack. We had raffle tickets, name badges, and answer sheets. The trivia questions were divided in groups of 25 among five different bars. You filled out the answers on a rough-draft scantron-type answer sheet, and then transferred them all to the final copy when finished. Each participating bar not only had trivia questions, but also “drink specials.”

Michael Murphy’s had the first 25 questions and teams had until 6 pm to answer them. This was probably my favorite place out of all the places we were at. I liked the ambiance, and I could see myself going back there for a fun night out. It was dark lit, nice energy, and the mimosa the bartender concocted was on-point! Best $4 I spent all night.

After we answered our first round of questions, we moved on to Coyote Ugly, our next stop. We didn’t linger here. Hangriness was setting in and we just wanted to answer our questions and go. The bartenders were pulling out all the tricks to get us to take shots with them and dance on the bar, but we weren’t feeling it. I can’t see myself ever going back to this place because, well, I would rather pay money and go to a strip club and watch professionals if I am going to watch that kind of “dancing.”

We were ahead of the game and decided to take a much-needed food break at Yucatan Taco Stand. After our mimosas and shots, this was just what we needed to fuel our bodies for the upcoming shenanigans. I had the fried fish burrito bowl. I recommend it. Very tasty.

Next stop was Pretty Please Social Room . By this time, most of the trivia crowd was fatigued, soaked, and in desperate need of libations. Since our ravenous hunger had been silenced, we treated ourselves to beers, gummy bear shots, and jello shots. Service rocked for the amount of people there. We snagged a booth in a corner off the “dance floor” and answered more questions. Cocktail servers taunted us with jello shots, which we snatched. They were 13% alcohol, had a slimy consistency, but they did the trick. A few people whispered that they like mine better. Shhh.

The final bar with questions was Whiskey Chicks. It has the feel of a country bar, yet was dropping some good 90’s and 2000’s dance music. There was only one big screen with questions and most people were huddled around so that they could answer. I danced myself up to the front of the line, grabbed some beverages, and met our group back at the table. This was the only place that had food. Loaded fries were devoured. Shots were downed. Dancing was commenced. “Nate” may have been stalked by a bachelorette party. By this time, we were all buzzed, yet running low on energy. Between the cold wind and rain, hiking all over Bricktown, and battling the other players for drinks and TV monitor time, I think we were all ready to call it a night. Unfortunately, we still had to go to the after party where they were going to do the Dundee awards.

We all got a text at 9:45 pm to wrap up our answers and head over to Club One15. We did as told, and battled the wind and rain across Bricktown again. This time, we had a long line to stand in OUTSIDE. The bouncer snuggled under a protective awning, shielded from the cold and rain. The rest of us trivia people were huddled together like cattle, trying to absorb each other’s body heat without crossing personal boundaries. This is probably my peeve of the night. Knowing that it was cold, windy, and rainy, I feel like this last stop of the night, the after party, could have been handled better. We all had our Dunder Mifflin name badges around our necks. They could have separated us and brought us inside more and checked our ID’s there. Just a thought for next time, guys.

At Club One15, we were to turn in our answer sheets and await the Dundee awards. Unfortunately, it was going to take about an hour for them to tally everything up and announce the winners. We danced for a bit, but half of us didn’t wait around to see who won. We were done. The few who did stay noted that we weren’t any of the winners, nor did any of us win any of the raffle prizes.

In reflection, we made the most of this event. Despite the rain, wind, and cold, we laughed, drank, danced, and made some great memories. Would I do something like this again? Probably not. We take our trivia seriously. No phones used to look up answers. That is cheating. This event didn’t have any kind of monitoring system in which people were prohibited to use their phones. Since the questions were played on rotation at each bar, technically, you could sit through the cycle, look up the answers on your phone, and get all the answers right…which is what some teams probably did. The “drink specials” were not that special. I feel that they were about what you would expect to pay on the special items they had featured. The price for the ticket included your cover for all these bars, but most bars don’t charge cover until about 9pm. Most of the trivia was done before 9pm.

In the end, I did get to experience 4 new bars that I had never been to before. I would only go back to one of them. Definitely going back to Yucatan Taco Stand. Definitely NOT going back to Coyote Ugly. I am not a big bar-hopper, but I feel that I could probably create my own pub crawl with my friends and have more fun. I also think that the wind and rain was a factor in my overall opinion of the event. Had it been nicer weather, we may have lingered outside and explored some more areas in Bricktown between the bars.

Have you been to a Trivia Pub Crawl before? What was your experience?

View all posts by dhogan30